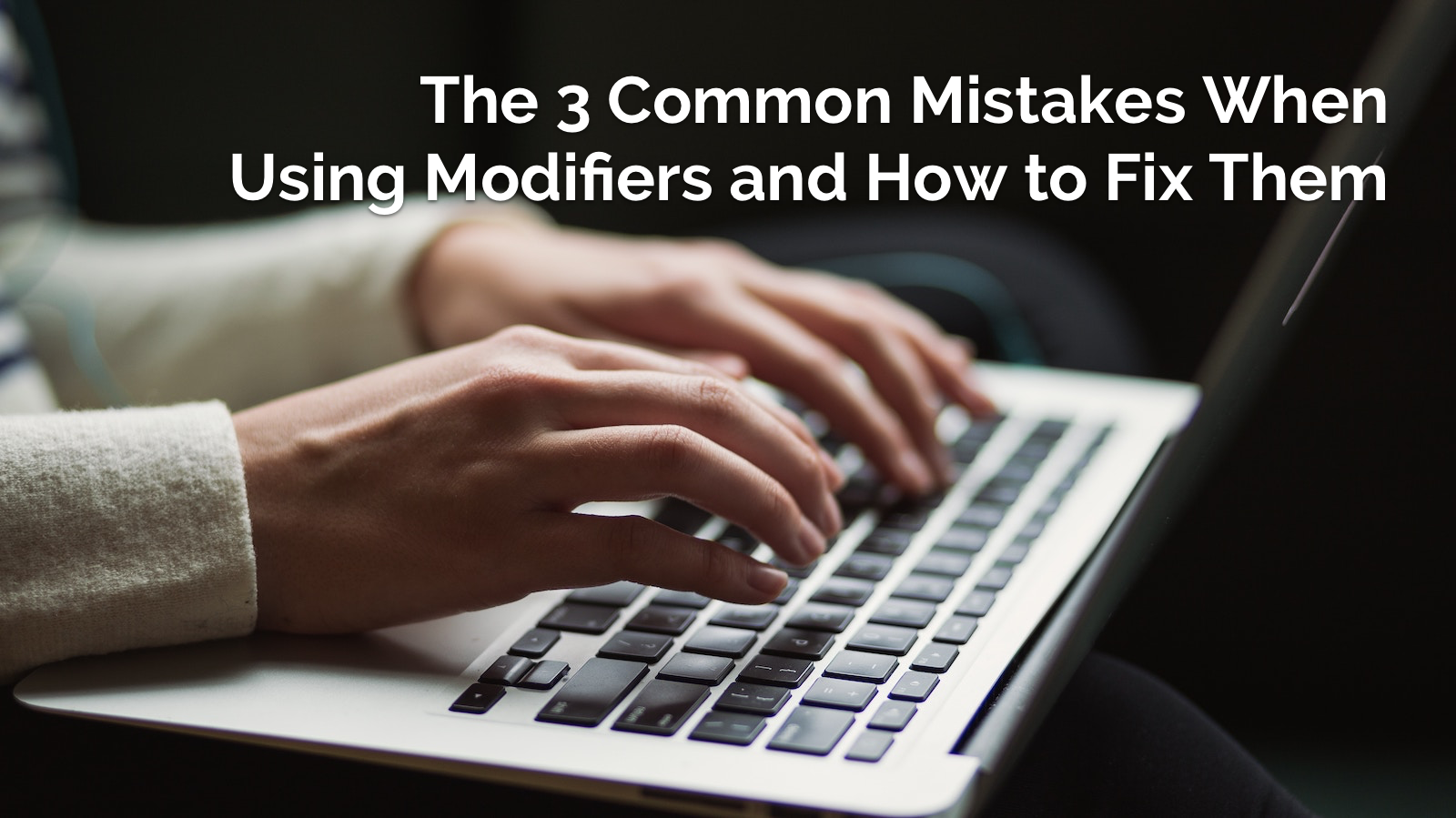 Do you know that one word can absolutely change the meaning of a statement?

Today we will discuss modifiers and what they do. They change the whole idea of a sentence, depending on how they are used. Modifiers is an important grammar point and very useful if you want to write good English essays, articles, documents, or letters. Learning how to use modifiers correctly will prevent confusion in writing.

A modifier is a word, or group of words, that describes other elements in the sentence. This can also be a phrase or clause that gives more information about something else. For a sentence to make sense, you want it to be as close to the thing it’s describing as possible. So, depending on where you place the modifier, the idea of your sentence will change as well. Let’s look for the modifiers here:

[every modifies or describes test]

“A very pretty girl walked closer to the bench.”

[very describes how pretty the girl is]

“The young boy walked quickly to the pool.”

[quickly describes the pace of walking]

We use modifiers all the time, in our everyday conversations, and in various situations. They give us more information about something. But sometimes they get us into trouble in a way that our listeners don’t always get what we mean. Both ESL learners and native speakers make these mistakes. These mistakes are very common and can be embarrassing at times because your sentences will have different meanings.

1) DANGLING MODIFIER describes something that’s not actually in your sentence.

 “Loud crashing sounds, I wonder what was broken.”

What I want to actually say here is, “I heard something that’s making a sound, I am wondering if there’s something that got broken”. But in the above sentence, it seems that I am the one that’s broken. So in order to fix this, I need to say what is making the sound.

  “Driving down the country road, the trees look beautiful.”

Here, it seems that the trees are the ones driving down the road.  To fix this, we need to add in “who is driving”. This is the missing information in the sentence. So, the clearer way of saying this is,

   “Amy ate an apple sitting on the park bench.”

Did Amy eat the apple she found on the park bench? Hmmm… That’s not very clean, I suppose. Or, did Amy sit on the bench while eating an apple? Here are better ways to express this sentence:

  “Betty sat waiting for her boyfriend to park the car, in a sexy red dress with a low neckline.”

In this sentence, it sounds like ‘sexy red dress with a low neckline’ describes the car. For this to make sense, here’s what you can say instead:

  “I went to see a game yesterday with my cousin, which was really boring.”

So, which was boring, the movie or the ‘going out to see a game’ part? As the reader, I am not sure what this “which” is. What does it modify? Here are better ways to write the sentence:

2) SQUINTING MODIFIER means the sentence is confusing because it ‘looks either way’ or both ways. Potentially two things are being described. With this, the reader is not sure what you want to describe exactly.

  “Employees who come late to work frequently get suspended.”

  “Our manager told me on Tuesday he would get back to me with the latest product update.”

This is squinting because you can’t be sure what happens on Tuesday. Did the manager tell you about it on Tuesday? OR Will he get back to you with the updates on Tuesday? You can fix this in two ways depending on what you want to say:

When you have a squinting modifier, try to pause and evaluate what you want to really say. Then, move around the modifier accordingly. Its meaning can go either way because of the ambiguity. This is why you must put the modifier in the right spot to describe something clearly.

 “The senator expressed his apprehension that if these practices were not stopped in  New York there would soon be chaos and mayhem similar to that which he had seen in Sydney.”

So what is this statement really saying, if these practices were not stopped in New York? OR there would soon be chaos and mayhem in New York similar to that in Sydney?

 “She saw beautiful flowers on the way to the park.”

Did she see flowers going to the park? So, this would mean that the flowers are walking towards the park—which is really odd. OR, is it “on the way to the park, she saw beautiful flowers”?

With the second sentence, I understand that it’s her who is on the way to park, and not the flowers.

 “Miles ran away from the dog in his pajamas.”

What does this really mean? Is it Miles who is running away while in his pajamas? OR, is it the dog that’s wearing the pajamas and Miles is running away? Here are two ways you can correct the mistake:

 “Covered in dirt, the dog went ahead and ate the pizza.”

Now this sentence makes a lot of sense!

Just remember that a squinting modifier has double meaning. What you’re saying can go both ways so make sure to re-arrange your sentence and put the modifier at the right spot.

3) MISPLACED MODIFIER describes something in your sentence other than what you intended. In the following examples, the misplaced modifiers are underlined. You need to move it around for the sentence to be clearer.

 “The washing machine is running in the basement.”

This seems to say that the washing machine is actually running somewhere downstairs. To fix this, you have to put ‘in the basement’ at the right spot. Just move the modifier around to be sure about what you mean.

 “She served cakes to her guests on paper plates.”

This almost means like the guests are on the paper plates. So, to correct this, say:

 “He nearly practiced playing the violin for 6 hours yesterday.”

 “The gold woman’s bracelet was missing for a few days now.”

At first reading, it looks okay, but when you read again, you can see that the woman is gold, not the bracelet. So, just switch the word gold since it is in the wrong spot. Here’s the correct sentence:

 “Harris took pictures of objects that other photographers would not consider with her camera.”

 The salesman at the appliance store said there’s a provision for returning damaged items in the warranty.

Moving these modifiers will fix the mistake and will help the readers understand your writing better.

What we just discussed are technical terms: dangling, squinting, and misplaced. But, don’t worry so much about how accurate you are in identifying the name of every mistake. Just keep in mind that the general point is that if your modifier is in the wrong spot, it will distort the idea of your sentences. And, because of this you run the risk of being misunderstood.

Here are things to remember to avoid making these common modifier mistakes when writing.

Follow these simple steps and avoid being misunderstood. These will also save your sentences from embarrassing meanings.