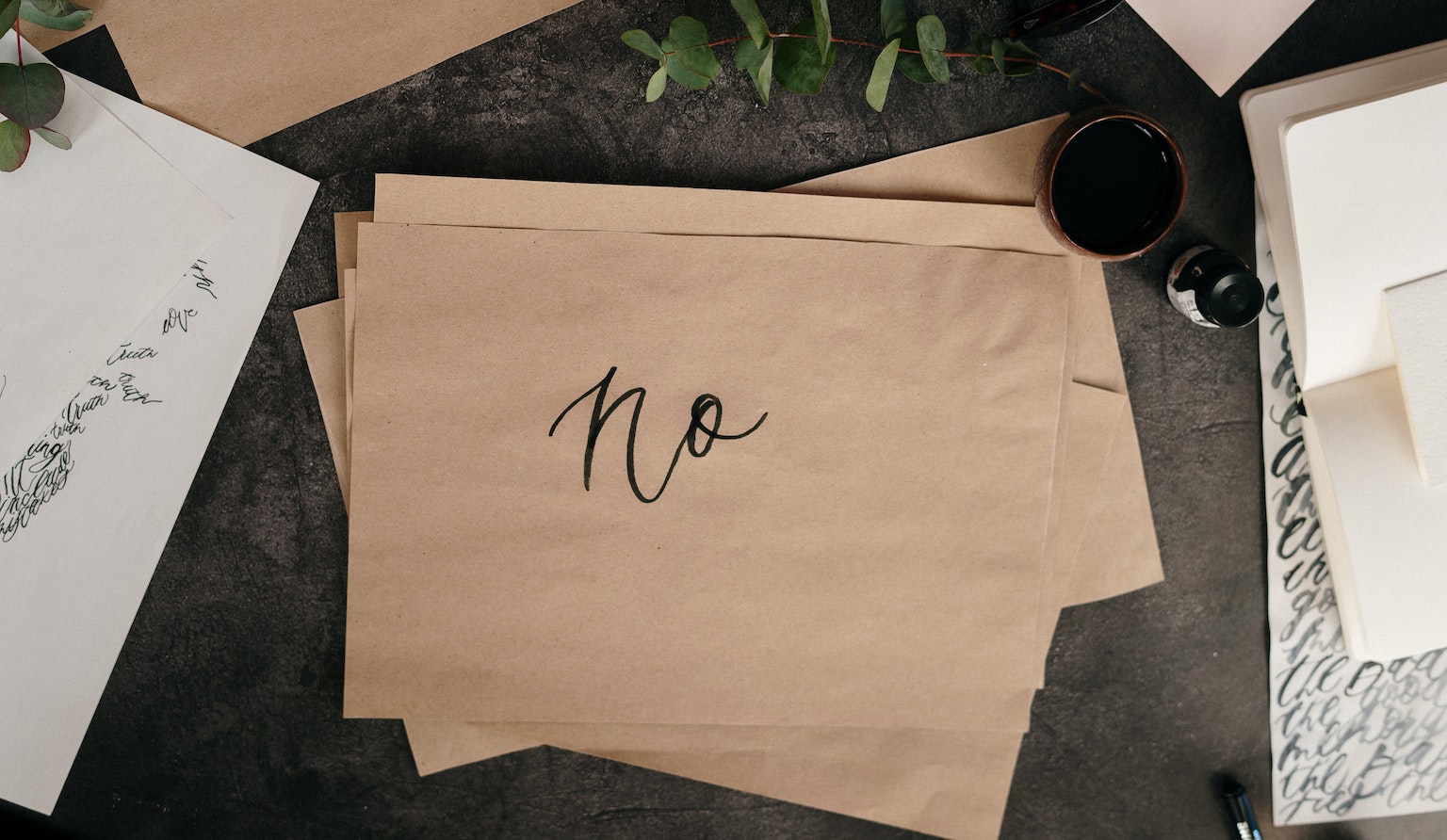 Most of the time, we think that saying “yes” is always a positive thing, and saying no is unpleasant. Saying no isn’t always a bad thing. At certain times you have to refuse because it is not healthy to agree to everything. Whether you like it or not, you will encounter a situation where you have to decline because you have a prior commitment, a lot of tasks to do, or not just participating in it. Since saying no can be awkward to do, it is oftentimes tempting to agree than to refuse. Although saying no is challenging, you have to do it because you might end up over-committing yourself and be stressed being tangled up with different commitments and tasks if you don’t.

Learning how to say no, without making others feel offended, is a valuable skill. It prevents situations from getting awkward, plus it makes you productive and focused on the things that you ultimately have to do. It will help you stay personable, polite, professional and prevent you from burning a bridge. This post will provide you some tips on how to courteously refuse invitations or reject an offer. Also, there are examples of each technique for you to see how you can do it.

1.  Include “thank you” in your response

One of the simple ways to make your statement sound positive is to add “thank you.” By doing this, you will show your gratitude for the opportunity that is being offered to you and express your appreciation that the recipient has thought of you. Also, it does not make rejecting the offer sound rude. By expressing your gratitude, the person will feel that you think positively of the offer but will understand that you just have to turn it down due to some reasons. It is important to note that saying thank you is not always applicable in every situation. This works best when you have been invited or something nice has been offered to you.

Thanks for the invitation, but actually I have to work during the weekends so I can’t make it.

2. Give a sincere compliment before saying no

It is always nice to give a compliment to people. The requestor will feel good that declining won’t sound too negative by starting with a positive note. This will allow him to know how positively you feel about the offer and understand that your current situation does not permit you to accept it.

This sounds like a great opportunity.  It’s just that I have to pass at this time. Right now I’m doing a project with ABC company.

3. Clarify that you are only saying no to the request but not to the person

Another strategy to soften the negativity is by making sure that the requestor understands that you are turning down his request but not him. Since hearing the word “no” can be offensive, it is important that the other person realizes how you positively feel about him, but just have to refuse. This will avoid hurting his feelings and prevent him from having a negative impression that you are rejecting the request for personal reasons.

You know that I have always liked working with you. As much as I would want to collaborate with you again, I just can’t do it this time. I have recently signed a contract with XYZ firm.

4. Make an apology and express your regret for saying no

You can say no briefly and firmly without having to sound rude by replying with a respectful response. An easy way to soften the blow is by including the word “sorry” in your statement. This word transmits that you actually like to accept or agree with the idea or invitation, but your situation does not allow you. Other words you can use as alternatives are “sadly,” “regretfully,” and “I’m afraid”. By including this in your response, the recipient will feel that you also feel bad for refusing. To do this, start your statement with the word “sorry,” then follow it up with the reason why you won’t be able to make it to that engagement.

Sorry, but I can’t come to your birthday party because, at that time, I would have to attend a seminar in Singapore.

5. Refuse by expressing your humility

Using humility and blaming yourself is another way not to sound mean when declining an offer. This will make the recipient feel okay despite the rejection because he will understand that you have to reject the offer not because of him but because of your limitation. Not only will it make your reason acceptable, but it will also allow the requestor to see that you are honest. You can explain to him that you think you aren’t the right person for the task because it is not your expertise. Just make sure that you do it appropriately and will not sound too self-deprecating. Also, if you are going to use this strategy, ensure that it does not contradict your reputation, i.e., denying that you are skilled at something that everybody knows that you are good at.

I don’t think I am the right person for the job. Although I’ve done digital marketing, I haven’t had the experience to do traditional strategies.

6. Provide a reason for saying no

You can easily refuse by simply saying no. However, since this is curt, it can easily offend others. Straightforwardly rejecting without giving the requestor a  reason can make him regret asking you. One of a kind things you can do if you are going to turn down an offer or decline an invitation is to tell the requestor why you are refusing. This will make you look considerate and friendlier. By giving a reason, you help the person understand why you have to refuse, plus you wouldn’t sound mean. When the requestor understands your reason, it will be easier for him to accept the rejection, and there’s no need for him to ask you further questions.

Here are a few reminders when giving an excuse:

I can’t visit you Tuesday. I’m not free that day.

I can’t visit you on Tuesday. I have a huge project due on Wednesday.

7. Express that you “wish” you could help

By adding the word “wish” in your response, you can make the requestor understand that you wanted to agree but just couldn’t because of some constraints. Knowing that you’re also interested will prevent him from feeling bad for asking. He’ll also be able to walk away, still feeling positive even if you cannot accommodate his request.

That’s really a great idea. I wish I could visit your country soon, but traveling becomes difficult these days because of the crisis.

8. Include the word “honestly”

When you give your reasons for declining an offer, it is unavoidable that your recipient may think that you are just making excuses. Thus, it is good to emphasize that you are being honest when you are giving your reasons. You can do this by adding the phrase “to be honest” or “honestly” in your speech. Doing this will make you sound sincere.

That sounds fun, but honestly, I don’t feel comfortable traveling with strangers.

9. Suggest another person who can fulfill the request

If you can’t do the task, it will be helpful to suggest someone who can fulfill the request. Not only will you avoid hurting the requestor’s feeling when you turn down his request, but you will also be able to guide him on what to do next. Since you gave him an idea who to turn to aside from you, he would feel that you did not totally let him down.

Thanks for asking me. Unfortunately, I will not be able to accept that project because I’m migrating to another country next month. However, I can recommend a friend of mine. He’s also good and has the same specialization as mine.

10. Give them a hint to understand your situation

If the offeror is pushing you to say yes, you have to reiterate your stand. If you can’t accept the invitation or offer, it is just right to be firm instead of giving in and giving false hope. Firmly refuse by courteously repeating your statement that you can’t do it. Then give the offeror a hint that he also needs to understand if you can’t accept his offer.

I know you need my help. But as I’ve told you, I can’t take on any more work because I have been assigned to complete several big projects.

To soften the negativity, it is advisable to maintain a polite tone when declining an offer to make it sound less harsh. As the famous writer Angelou Maya said, “people will forget what you said…. but people will never forget how you made them feel.” Remember that what you say is important as how you deliver it. So make it a point to sound friendly and polite even if you have to say no. Also, since communication has been easier nowadays, keep in mind that it is better to say no in person if the concern is significant. This will enable you to explain your reasons well if you need to. Moreover, doing this reflects that you are showing courtesy to the requestor. Lastly, listen to the requestor’s response and acknowledge his reactions after saying no to show that you understand him as well.

Your no is just as important as your yes. Don’t be afraid to refuse so you can focus more on important things. Good leaders and smart people are not afraid to say no if they have to. They respond according to what they think is good not just for themselves but for the majority. Saying no could mean deciding based on logic and good reasoning. If you do it tactfully, you may even earn respect instead of disgust from the people you declined. Use the tips above whenever you need to refuse so you can confidently say no with grace.

Want to improve your conversation skills in English? Enroll today at LingualBox and let our tutors help you improve faster.