How to Use “Either” and “Neither” Correctly? 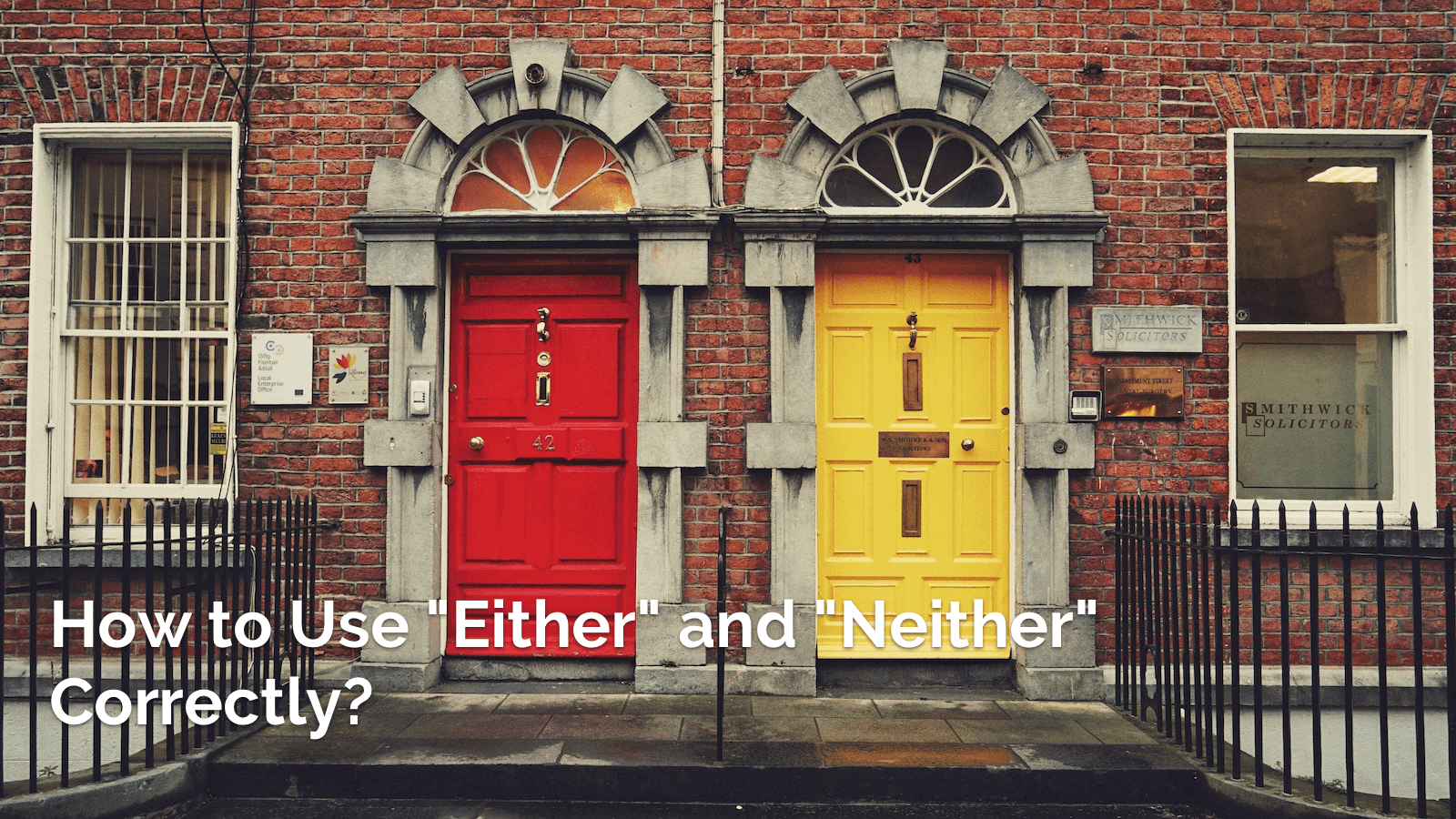 Have you experienced someone talking to you, saying “Either you go swimming with us tomorrow morning or you go with Jerry to watch this new movie tonight”? Which one will you pick?

Apparently, in this scenario, you’re given a choice.  Either you — OR —. Two options are presented to you, and you can pick only one.  You can’t choose both.

These are correlative conjunctions and used in the same sentence. They go in a pair (either, or), emphasizing choice between TWO objects or options.

Example 1. Either Dad or Uncle Bob has the keys to the cottage.

You may want to know what verb form to use. Remember to base it on the nearest noun or subject. The verb must follow the form of the subject nearest it. So in the example above, Uncle Bob is the nearest noun and he is only one, so we use “has”. It’s not both of them so using “have” is incorrect.

Example 2. Either Hayley or the girls are going to perform at the high school concert.

The nearest noun is in plural form—girls. So the verb that immediately follows must also be in plural form, which is ‘are’. Let’s try and reverse this:

Example 3. Either the girls or Hayley is going to perform at the high school concert.

In this case, Hayley, a singular noun is the nearest to the verb—is.

Example 1. Neither Ashley nor her boyfriend talked about moving to a new apartment.

Example 2. Neither the restaurants nor that café serves good cheesecakes.

(Notice the singular noun nearest to the verb “serves.”)

Example 3. Neither that café nor the restaurants serve good cheesecakes.

(Here, notice the plural noun nearest to the verb “serve.”)

Example  4. Neither Jim nor his sisters like cleaning their bedrooms.

(The verb “like” has to agree with the nearest subject or noun, which in this case is in plural— sisters).

Example 5. Neither Jim nor his sister likes cleaning their bedrooms.

(This is the reverse of Example #4, so the verb “likes” agrees with the singular noun—sister).

Here are other key points that distinguish the different usages of neither and either. Just keep in mind that these words express our choice when given an option—whether positive or negative options. And, these also talk about two things, for example, “I neither read magazines nor watch movies.”

Before we go on, let us clarify the question around how they are pronounced. Both of them actually have two pronunciations:

All these are correct.

HOW TO USE EITHER

1) This is a brief recap of our discussion earlier on ‘either, or’. When you have two options, the word either means only one of the two but does not refer to the other. Here are examples:

“You can have either a cheesecake or apple pie. Which one would you like?”

“Let’s have our class either on Monday or Wednesday.”

2) When someone offers you a choice between two things and you don’t care which one is chosen, you may say “either one”. Look at these examples:

Person B: Either one. Whatever you’re having, I’ll have it, too.

Person A: We have these two landscape photos. Which one do you want to use for the background?

Person B: Either one. They are both nice and will make the room look brighter.

HOW TO USE NEITHER

1)  “Neither” or “not…either” both mean NOT one thing, and NOT the other thing. This means you’re saying “no” to two things. Here are examples:

“I do NOT speak EITHER Spanish or Dutch.”

This has the same meaning as,

“I speak NEITHER Spanish nor Dutch.”

“I do NOT speak EITHER of those languages.

“I speak neither of those languages.”

2) When naming two items specifically, use “not, either, or” and “neither, nor”

“Neither my mother nor my father likes to travel.”

(Here we used the two items specifically: mother and father)

“Neither Dad nor Uncle Bob has the keys to the cottage.”

3) When saying the two items together as a group, use “not, either, of” and “neither, of”

“Neither of my parents likes to travel.”

(Here, you’re talking about your parents together as a group.)

“Neither the first movie nor the second movie was very good.”

This means the same as,

“Neither of the movies was very good.”

(Here we use ‘was’ because the verb is referring to ‘neither’ or not one.)

“Neither movie was very good.”

Person A: Which of these two applicants is better suited for the position?

Person B: Neither one. We need to interview more applicants so we can have more options.

Person A: Do you want an apple juice or a can of soda?

Person B: Neither. I’m actually not thirsty at all.

So, if you notice, this is the exact opposite of our example above, under “HOW TO USE EITHER”:

Person B: Either one. Whatever you’re having, I’ll have it, too.

USING EITHER or NEITHER to AGREE

When somebody makes a negative statement, meaning a statement with the word “not” in it, you can use ‘not either’ or ‘neither’ which means “also not.”  In these particular situations, you’re showing your agreement to the negative statement. But remember that the structure of the reply is a little different, depending on which one you use.  Look at the following sentences:

Chris:   Me neither. (This is an informal way to say it.)

Teacher 1: Tom did [not] come to class today.

Barbara: We haven’t booked our tickets yet.

Don’t worry if you don’t get it right away. These were all confusing to me, too, when it was my first time to encounter the topic. But, after watching more of English movies and TV shows and listening to radio broadcasts and audio storybooks, I became familiar with them. I also found that ‘either’ and ‘neither’ is very commonly used.