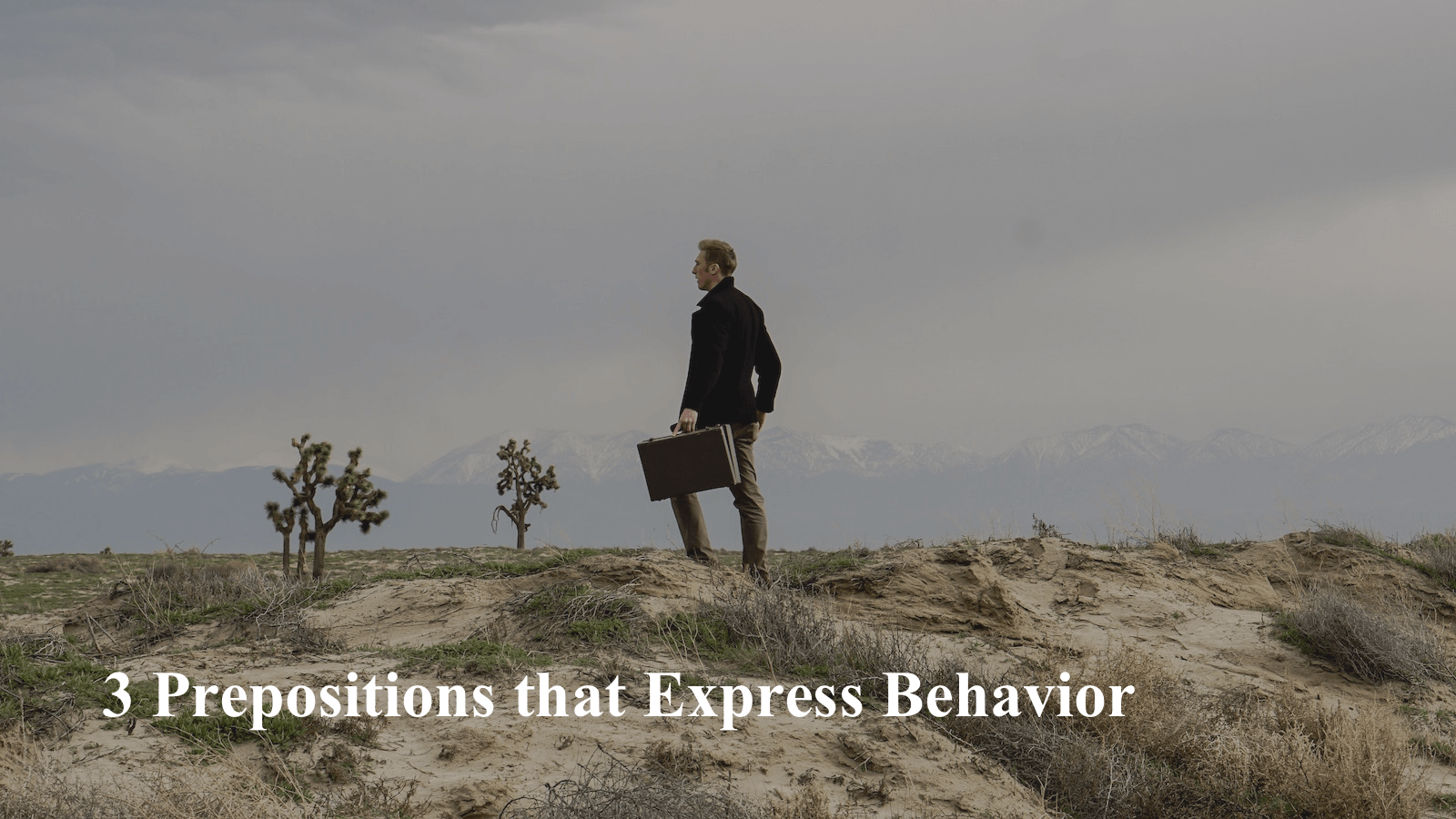 Okay, so we all know that one of the difficult things to learn in English grammar is prepositions. English learners often find it challenging, and sometimes confusing, to use the right prepositions. And today, that is what we’ll be talking about.  But this is not your typical preposition grammar lesson though. There is one unique function of the preposition that we will look at closely.

We know the basics. Prepositions are most often used for direction, time, the position of something, and the reason why we do something.

I’m going to the park.

The cat is sleeping on the sofa.

I found the ball behind the green box.

The show was canceled because of the rain.

She wrote her letters with a purple pen.

But, there’s a special way of using prepositions. How? It’s pretty simple. We take the idea from the preposition, put it together with an adjective, and use it to describe people’s behavior. This is learning prepositions in context. We will see that they are also used to describe what people are doing. We’ll use these to talk about people’s behavior. Behavior is how someone acts. These are certain actions that show whether people are nice to you or not.

Let’s look at these word pairs or collocations to describe certain behaviors. The pattern we’re using is preposition + adjective.

This preposition means to put an object on the surface of something.

“Put on your sweater. It’s getting cold.”

“I need to put on my sunglasses”

“Put the kettle on the burner.”

Use these adjectives before “on” as these are common collocations in English.

“This soap is tough on dirt.”

Tough means hard, so the soap is very strong and can get rid of any dirt.

“His parents are tough on him.”

This means that they don’t make things easy for him. He has to work for the rewards, toys,  or gadgets they’re giving him. It is their way to discipline him because they love him. It’s called tough love.

“The current mayor is tough on crime.”

This means that his administration monitors crimes, keeps a tight watch on offenders, and they don’t let crimes go easily. They are serious in catching and punishing criminals.

This is actually the opposite of “tough on.” So, for instance, your uncle is easy on you—not like your father. So if you made a mistake, your uncle would say “Hey it’s okay, you can try again.”

When someone is easy on you, it means they don’t make things difficult for you. They are being gentle with you.

This is not a good way of treating someone. A common example of this is bullying in school.

“The Senior High gang members are rough on freshmen boys.”

This preposition means movement from one place to another.

“Kyle and Shaylee are going to the bank.

Use these adjectives before “to” as these are common collocations in English.

Cruel means not nice, so the direction of cruelty is towards (to) somebody.

“Some of the hunters are cruel to bears.”

Kind or kindness is something quite positive.

“Those children are kind to their elderly parents.”

Being rude is showing disrespect.

“That lady is rude to the old man.”

This is when someone gives you help.

“The villagers are helpful to the stranger.”

These word pairs or collocations help you understand what a person is doing TO someone.

This preposition means approximately, almost, or it goes in all directions. Here are common collocations in English for ‘about’.

Selfish means it’s all about me, me, and me.

“Henry is selfish about his video games.”

This means he does not share them with anyone.

“Tim is selfish about his Lego set. He’s not sharing it with his cousins.”

“Karen is selfish about that pizza. She’s not giving me even one slice!”

This does not mean crazy, mad person, or someone who lost his mind. This means “I like it a lot!” It is an intense feeling about something.

“Steve is crazy about Megan.”

And you bet! It’s also used to express something negative or to say that you don’t like something.

“I’m not crazy about taking that test.”

“I’m not crazy about going to my midnight shift.”

“I’m not crazy about hot coffee. But I love iced coffee.”

‘Mean’ is not nice behavior. It’s the same with unkind or being unpleasant.

“Sheila was mean about telling the kids to clean their rooms.”

“The manager was mean about giving discounts to senior citizens.”

“The guard was mean about wearing slippers inside the building.”

“The doctor was kind about telling us the bad news.”

“The lady at the restaurant was nice about giving the beggars a free meal.”

As you can see the pattern here is:

So by using the idea of TO, it shows the direction of behavior towards a person. The idea of ON is used to show a behavior being ‘put on’ a person so that he is feeling it. And, the idea of ABOUT is used to express something around the subject.

Here are other examples that show behavior by using prepositions:

Our English teacher was tough on us, so we can improve.

Herbert was cruel to the dog, so they took it away from him.

John is crazy about his wife. He loves her so much!

The manager is helpful to the new hires.

There you go! Prepositions, adjectives, and collocations are basic English lessons we need to understand better so that we become good in the language.